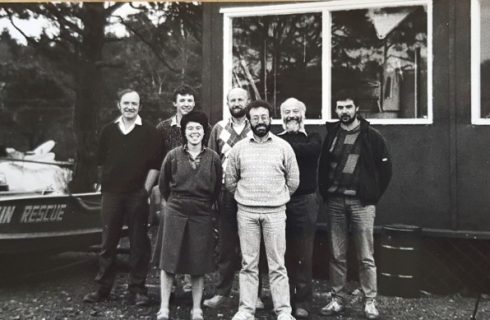 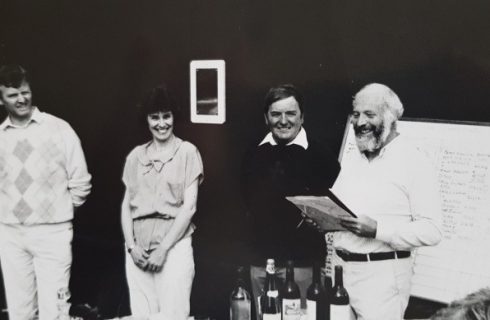 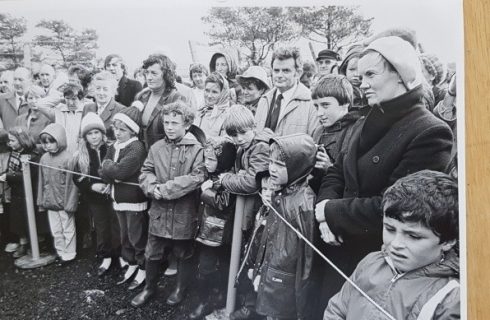 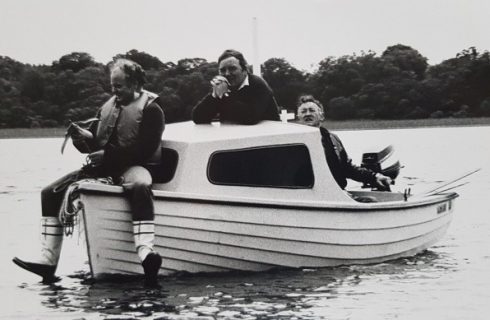 In the year 2000 we celebrated our 21st anniversary. That is 21 years since the formation of Cullaun Sailing Club but the origins of the club go back a few years more to the late 1960’s In the beginning a few enthusiasts in Shannon took up building wooden Mirror dinghies to sail in the Shannon estuary. The Shannon Sailing Club was then formed with the support and enthusiasm from Kevin Naughton a member of Foynes SC.

Any one who does not know the estuary round Shannon and the airport can be forgiven for getting the impression that it is all mud most of the time. Sailing anywhere near low tide was impossible and an alternative launch site was found on the Fergus estuary on the north side of the airport not far from the Honk pub. A slipway was built from the shore to a narrow channel so that open water could be reached at low tide. But very quickly this slipway was covered and lost in mud and the club searched for alternative sailing waters again. The club re-sited its activities on Ballyalla just north of Ennis off the Gort road and had several successful years with over seven Mirrors at any one time. Their annual regatta was held at the same time as the Ennis Harvest Festival and was by all accounts a very successful event which promoted activity in the club.

Alas Ennis stopped having a Harvest Festival and interest in sailing dwindled. The name of the club was changed to the Ennis Sailing Club in the early 70’s in an attempt to identify more with the town but to no avail. However a small band of intrepid sailors still took their sport seriously and went off to explore the numerous lakes in Clare. In some way the Ennis SC became “itinerant”. Think of a sizeable lake and they probably sailed on it. Inchiquin lake near Corofin was tried for a while, but the swirling winds off the hills made it dangerous for sailing, Cullaun lake was also sailed frequently launching from the old turf bank into deep water on the north shore that fishermen use today.

Kevin was at this time the Irish Mirror class secretary and organised a National Mirror championships at Mount Shannon around the time that Iniscealtra S C was formed for cruisers at Mount Shannon. There was no connection between the two clubs other than the cruiser club attracted the mirror sailors into bigger boats, but the Ennis SC still existed - just about.

The secretary of the Ennis SC in 1979 was Jimmy Cronin who sadly saw the demise of dinghy sailing and was determined to do something about it. He himself had moved into bigger boats but felt that dinghy sailing still had a lot of sport and craic to offer so he placed an advertisement in the ‘Champion inviting anybody interested in dinghy sailing to an open meeting at the Queens Hotel.

About 20 people turned up, most with little or no previous experience, some with quite a lot including Stewart Nairn. The upshot of the meeting was that a new committee was formed, Maurice Griffin as Commodore and Chris Davis as secretary.

The first task of this new committee was to find a “home” water. Several lakes were looked at but finally deciding on Cullaun Lake. It was argued that it was the biggest lake round lake in Clare and not too far from Ennis and Shannon ( and as it turns out Limerick as well ). So in 1980 we started sailing in Cullaun from the lee shore off the Kilkishen road. Here, rather than off the turf bank, as then there was car access to the lake shore. This was not a good place , shallow, rocky, weedy and lee, and an alternative launch site on the lake was looked for.

Late 1980 saw us sailing from the house on the west shore. There was access by car to the edge of the lake, plenty of deep sheltered water but no beach which made it difficult to launch.

In 1981 the Club became formally known as the Cullaun Sailing Club and a constitution was drawn up largely through the efforts of Stewart Nairn (RIP) that we still use today.

The Club then levied small membership fees which gave us some development funds. The first thing was to make a beach on the west shore which was done with a JCB and a load of ‘one inch down’ and by using garden shears and snorkels a channel was cut through the reeds. Both the shore and channel can still be seen today and has added to the amenity for the public good. ( Even Santa has been known to use this beach).

There was great enthusiasm in the club, about a dozen boats of very mixed class from Toppers, a Hobbie, a Miracle to a brand new Wayfarer all of which had to be trailed to and from the lake. But no rescue facilities. On more than one occasion the Wayfarer under oars had to be used to tow boats back up wind to the beach. Maurice Griffin was still the commodore and his zest and enthusiasm for dinghy sailing was contagious and not satisfied with poor rescue went off and bought the aluminum boat we still have and use today. It was first used in the winter of 1981 which was so cold that the spray froze as it landed in the boat and your seat got literally frozen to the aluminum thwarts. There is no doubt that winters are now very much milder.

We held our first class championships for the Miracles off the house shore and held great annual regattas with boats coming from the then quite active Killaloe, Loughrea and Galway Bay sailing clubs. And we in turn went to their regattas and competed also for an inter club trophy. We also were founder members of the now defunct Shannon Sailing Association which co-ordinated the events in the area, something that the ISA is now trying to resurrect.

The Club, always alert to promotional publicity, had floats in the St Patrick day parades in Ennis, which were great fun for the kids. Ennis now sadly doesn’t seem to do that sort of thing anymore.

Tragically in February of 1993 Maurice Griffin, who had been courageously hiding a terminal illness died. But the momentum of his enthusiasm carried the club forward.

After several years of trailering boats to and from the lake, the club purchased the crop of land that it calls home today. Much work was needed at the site and through the endeavours of the members at the time provides a much used home for the boats today. The original clubhouse was the old schoolhouse portacabin from Cratloe, which served us well until its demise earlier this year.

The club was always conscious of the importance of marketing and it was Stewart Nairn who suggested asking President Hillary, a local man, to open the new club facilities. To the surprise of most people he did come in the Summer of 1983 to officially open the club. ( Both the President and Stewart were big boat sailors which may have had something to do with it )

In the mid 90’s there was a lot of sailing activity at the club what with the well established home events, class away events particularly the Wayfarers and Enterprises and Class open regional events which have always been well supported and enjoyed. Sadly the Killaloe, Loughrea and Galway Bay SC dinghy activity died in the late 90’s and Cullaun Sailing Club ( Limited) stood alone yet still maintained an enthusiastic activity.

Safety has always been uppermost in the Club. A second rescue boat was purchased circa 1996 and it gave the club the capacity to hold events without having to borrow. The day the Shannon Marine Rescue helicopter was scrambled to make a rescue on Cullaun Lake had nothing to do with the sailing club, we told the newspapers so, but that’s another story.

Why Cullaun has still maintained its activity is undoubtedly because of the enthusiasm of its members and the encouragement given to new sailors to get into the sport. The rotating committee must also be a factor in generating a sense of club ownership in the members and the fact that the lake is safe water. The importance of introducing sailing to the young and novice sailor has always been important to the club which is now building up a small fleet of club sailing boats for novices to use before investment in their own boats. The summer junior sail training camps have always been popular since before 1984 and the week-end adult introductions to sailing have been in great demand and brought many new sailors into the club.

The future of the club is in the continued enthusiasm and passion of its members to sailing and being able to attract new sailors into the sport and art of sailing. The club has given me 21 years of fun and I’m sure will be here to give great craic and sailing for lots of people for many years to come.

( This little history comes mostly from my memories, and is very much a shortened version, but please do not read this as an authoritative document. More research is required for accuracy . Also, only a few names have been mentioned here, but there is not a person in the club past or present who has not contributed to the club and is worthy of mention. To all those, my apologies. )

There are no upcoming events.

Give Sailing a Try! 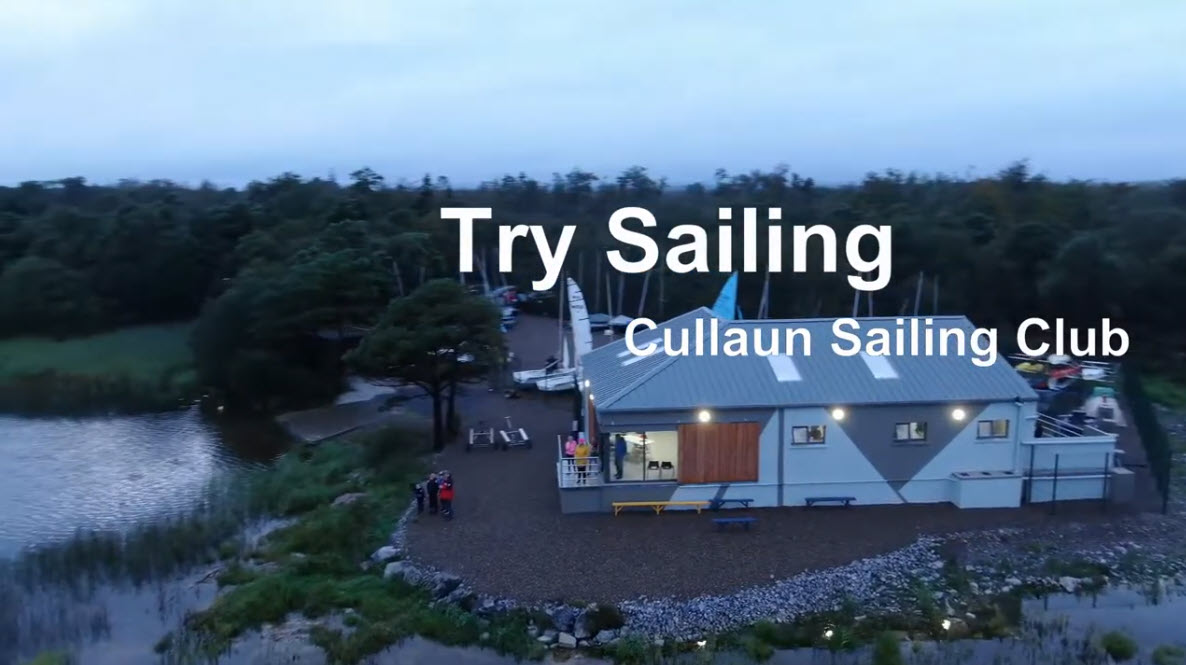 Cullaun Sailing Club is based on Lough Cullaunyheeda, in East Clare. Located 2 miles outside the picturesque village of Kilkishen, the lake is 1.5 miles long and is an ideal and safe sailing location. It is within easy traveling distance from Limerick City, Shannon Town and Ennis Town.